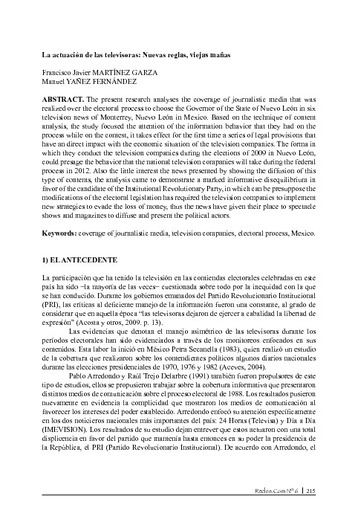 The present research analyses the coverage of journalistic media that was realized over the electoral process to choose the Governor of the State of Nuevo León in six television news of Monterrey, Nuevo León in Mexico. Based on the technique of content analysis, the study focused the attention of the information behavior that they had on the process while on the contest, it takes effect for the first time a series of legal provisions that have an direct impact with the economic situation of the television companies. The forma in which they conduct the television companies during the elections of 2009 in Nuevo León, could presage the behavior that the national television companies will take during the federal process in 2012. Also the little interest the news presented by showing the diffusion of this type of contents, the analysis came to demonstrate a marked informative disequilibrium in favor of the candidate of the Institutional Revolutionary Party, in which can be presuppose the modifications of the electoral legislation has required the television companies to implement new strategies to evade the loss of money, thus the news have given their place to spectacle shows and magazines to diffuse and present the political actors.

The following license files are associated with this item: