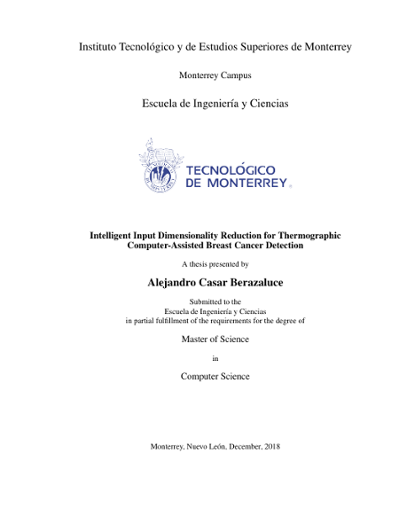 While traditional breast cancer thermography consists of a bidimensional image of the breast area, this study explores the possibility of reducing the size of the thermal input required by thermography to the temperature at only a few points in the breasts. That kind of information could be retrieved by locating temperature sensors around the breast, which could mean a wearable breast cancer detection implementation. In order to do this, the document first briefly summarizes and explains the methodologies used by different authors in order to implement computer-assisted thermography. Then it proposes a topological framework used to translate thermal images into a subset of points that represent what a wearable device that meets certain physical constraints would look like. This is implemented by using thermal images from 167 patients, extracting the temperature by software at 120 proposed sensor locations, 60 on each breast, and storing it in the new proposed representation. This new framework is then used to compare the methodologies used by authors in previous works, but now all under the reduced-data representation, and all using the same patient database. After finding out which kind of data representation leads to better cancer detection, the work then proceeds to use greedy search algorithms to find the subset of sensors that maximizes the predictive power of a cancer detection classifier. After the experiments, an accuracy of 88.9% was achieved using only a subset of the temperatures at only 16 locations on each breast, and an accuracy of 90.1% was achieved when combined with some statistical and spatial features computed from the temperatures. In order to evaluate the validity of these promising results, a noise and robustness test was also carried out by introducing noise into the data and studying the effects that followed. The results of this robustness test were quite relevant as well since they showed that a backward elimination search strategy can be used to remove the most noisy-prone sensors, and a forward selection strategy could potentially be used to find an optimal sensor configuration that maximizes the predictive power of the classifier. Overall, the results from this work show that thermography with reduced dimensionality achieves performances that compete with full-image thermography, and even with mammography, with the additional advantage of being implementable through a wearable device, thus not requiring the patient to visit a hospital to perform the screening. Currently the only other portable massive self-examination method is the self breast-exploration, which yields an accuracy of around 47%, which is pretty close to being a random guess. Compared to this performance, the proposed method proves to be vastly superior. It could potentially replace self breast examination as the main first-hand portable, non-invasive and non-radiative breast cancer screening tool and provide a major breakthrough in the battle against cancer by detecting the disease in the earlier stages with a greater accuracy and consistency.