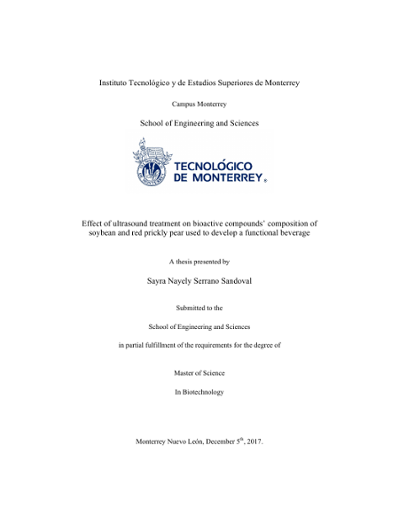 Soymilk and red prickly pear have nutraceutical properties. It has been reported that aglycone isoflavones in soymilk as well betalains, polyphenols, and vitamin C from red prickly pears have health-related attributes. Ultrasound(US) has been explored to enhance the content of phytochemicals in plant-based foods. Hence, the aim of this research was, to evaluate the effects of US treatment on the extractability and/or biosynthesis of antioxidants of soybeans and red prickly pears to elaborate a mixed beverage. Firstly, soybeans were sonicated with 100µm-20min at 30°C and soymilk was obtained. Individual isoflavones were quantified in the resultant soymilk and b-glucosidase activity was evaluated. Secondly, two studies were conducted with red prickly pears. In the first one, US was applied at different amplitudes(50, 75 and 100µm) and treatment times(5, 10, and 15min); and betalains, phenolics, and vitamin C concentration was quantified immediately after processing(0h) and after 24 and 48h of storage. The optimal conditions were employed in the second study(50µm-15min and 100µm-10min) and in addition to the quantification of antioxidants, the respiration rate and ethylene production were measured(0-48h, every 6h). Furthermore, tyrosinase activity was measured. Finally, a mixed beverage was prepared with soymilk extracted form sonicated soybeans and US-treated prickly pears(70:30 v/v) and the physicochemical and phytochemical properties were evaluated. Obtained results indicated that the activation of bglucosidase during US-processing of soybeans induced the interconversion of isoflavone glucosides to aglycone structures in the obtained soymilk. Furthermore, US-cavitation phenomena increased the extraction of isoflavones. On the other hand, immediately after US at 100µm-10min and during storage, the concentration of betalains on the peel and pulp of prickly pears augmented significantly, which was supported by the increase of tyrosinase activity. Furthermore, changes in the concentration of phenolics and vitamin C were also observed in the US-treated fruits. The data obtained from the evaluation of the respiration rate and ethylene production support that US affects both the extractability and the stimulation of biosynthetic pathways. The mixed beverage presented a high content of aglycone isoflavones, betalains, phenolics, and vitamin C which could have functional properties