Altered liver expression of genes involved in lipid and glucose metabolism in mice with partial IGF-1 deficiency: an experimental approach to metabolic syndrome 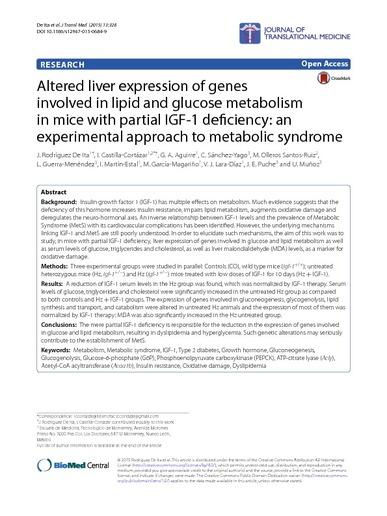 Abstract Background Insulin growth factor 1 (IGF-1) has multiple effects on metabolism. Much evidence suggests that the deficiency of this hormone increases insulin resistance, impairs lipid metabolism, augments oxidative damage and deregulates the neuro-hormonal axis. An inverse relationship between IGF-1 levels and the prevalence of Metabolic Syndrome (MetS) with its cardiovascular complications has been identified. However, the underlying mechanisms linking IGF-1 and MetS are still poorly understood. In order to elucidate such mechanisms, the aim of this work was to study, in mice with partial IGF-1 deficiency, liver expression of genes involved in glucose and lipid metabolism as well as serum levels of glucose, triglycerides and cholesterol, as well as liver malondialdehyde (MDA) levels, as a marker for oxidative damage. Methods Three experimental groups were studied in parallel: Controls (CO), wild type mice (igf-1 +/+); untreated heterozygous mice (Hz, igf-1 +/−) and Hz (igf-1 +/−) mice treated with low doses of IGF-1 for 10 days (Hz + IGF-1). Results A reduction of IGF-1 serum levels in the Hz group was found, which was normalized by IGF-1 therapy. Serum levels of glucose, triglycerides and cholesterol were significantly increased in the untreated Hz group as compared to both controls and Hz + IGF-1 groups. The expression of genes involved in gluconeogenesis, glycogenolysis, lipid synthesis and transport, and catabolism were altered in untreated Hz animals and the expression of most of them was normalized by IGF-1 therapy; MDA was also significantly increased in the Hz untreated group. Conclusions The mere partial IGF-1 deficiency is responsible for the reduction in the expression of genes involved in glucose and lipid metabolism, resulting in dyslipidemia and hyperglycemia. Such genetic alterations may seriously contribute to the establishment of MetS.